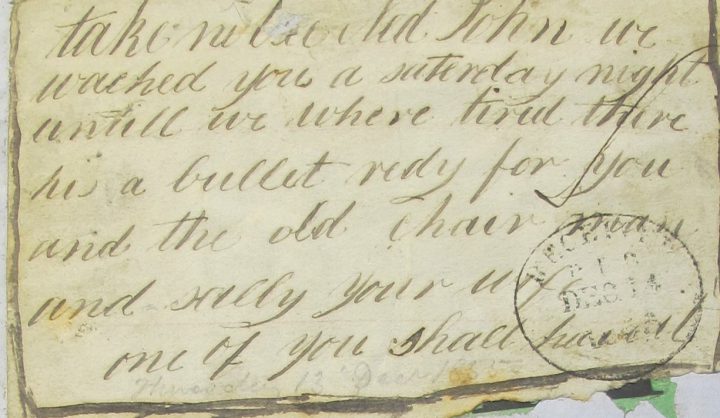 The latest collaboration from The National Archives and the Royal Central School of Speech and Drama is a play inspired by workhouse pauper letters written by workhouse inmates of the Cardiff Workhouse in the mid-1850s who complained about the conditions.

You can listen to the play online at the following link:

The paupers see the new master and mistress of the workhouse living well, hosting parties and syphoning off foodstuffs while they were being starved of food and separated from their loved ones. The paupers sent anonymous threatening letters outlining their grievances to the local guardians but their letters are ignored. The paupers decide to take direct action breaking workhouse windows to underline their resentment towards the local authorities. The play then focuses on the guardians’ determination to find those responsible for the letters and the paupers’ actions to address their grievances culminating in one of the paupers complaining to the Poor Law Board in London about their conditions.

“When we examine the past to write history we find in the archive that ordinary people truly lived remarkable lives. These lives, and the events that shaped them, are often aggregated to illustrate how common or historically important certain kinds of lived experiences or events were. Thus people might be expressed in charts and graphs as we try to understand and evaluate their lives. However, these records can also inspire creative explanations of the past as the historical basis of visual representations, films or storytelling as in “Your Unfortunate Servants”.

The play was written by Dominic Green, The National Archives’ writer in residence earlier in the year and a student at the Royal School of Speech and Drama

Dominic Green, said: “I found that the voices and events revealed by the historical record from the poor law union correspondence were so clear and dramatic that the story started to form almost of itself. These are historical human interest stories which allow us to hear people of the past speaking to us. I can already think of many ways to engage creatively with such amazing collections. This will not be the last time I will work creatively in the archives”.

The records were identified during the activities of In Their Own Write – a £1million Arts and Humanities Research Council funded collaborative research project – (initially between the University of Leicester and latterly Nottingham Trent University) and The National Archives.

The National Archives have been hosting student writers in residence from the Royal Central School of Speech and Drama since 2017.  Based within the Education team, the placement is part of the students’ degree course and is a real demonstration that archival and historical research can provide inspiration for those in creative sectors.

Tags: arts and humanities research council, In their own write, Nottingham Trent University, Poor Law Board, Royal Central School of Speech and Drama, University of Leicester