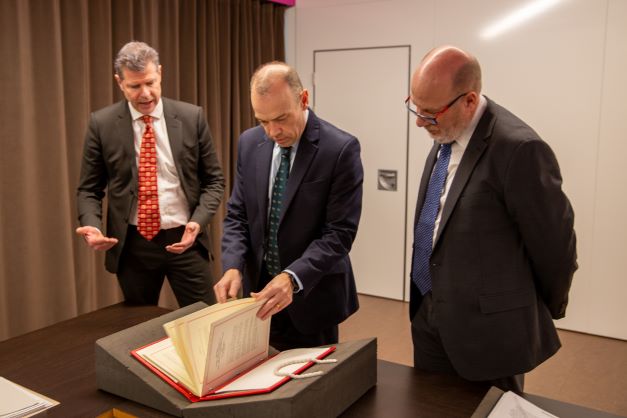 The Secretary of State for Northern Ireland, Rt Hon Chris Heaton-Harris MP, has announced the development of a new educational package telling the story of the Belfast (Good Friday) Agreement and Northern Ireland’s transformation over the past quarter century when he visited The National Archives. This is part of the Northern Ireland Office’s programme to mark the 25th anniversary of the landmark peace treaty.

The Secretary of State met the historians and educators who are co-creating the package in conjunction with teachers and other educational experts. The forthcoming free, optional resources will explain the Belfast (Good Friday) Agreement to school children and young people in an age appropriate, factual manner. The resources will allow them to reflect on Northern Ireland’s journey since its signing, including how Northern Ireland has moved from a period of conflict to the peace and vibrancy that it enjoys today.

As part of its work, The National Archives will create an advisory board made up of academics and teachers who have experience and understanding of the Belfast (Good Friday) Agreement, and will be working with young people in Northern Ireland who will tell Northern Ireland’s story.

Speaking after viewing an original signed copy of the Agreement and other related official records at  The National Archives, Secretary of State for Northern Ireland, Rt Hon Chris Heaton-Harris MP said:

‘Peace is precious, and it’s immensely important that young people in Northern Ireland and right across the UK learn about the significance of the internationally renowned agreement which was signed on their doorstep. Young people will write the next chapter in Northern Ireland’s story and these resources will enable them to understand and engage with the anniversary and appreciate the transformative difference the Agreement has made.’