Set cookie preferences
Home > 20sPeople > The 1920s: Beyond the Roar > Scenes of love and friendship

Scenes of love and friendship

We received a huge number of photos of life in the 1920s as part of our call-out for our recent exhibition, ‘The 1920s: Beyond the Roar‘. Here we have selected just 10 of the hundreds received to show as part of our celebration of love for Valentine’s Day. We wanted to capture the idea of love in the broadest sense, so with that in mind, photos feature everything from couples on their wedding day, good friends on days out, and people with perhaps humans’ greatest love: animals. The stories behind the photos prompt different emotions in turn, and show that, behind every seemingly ‘ordinary’ photo, there is a story waiting to be told. 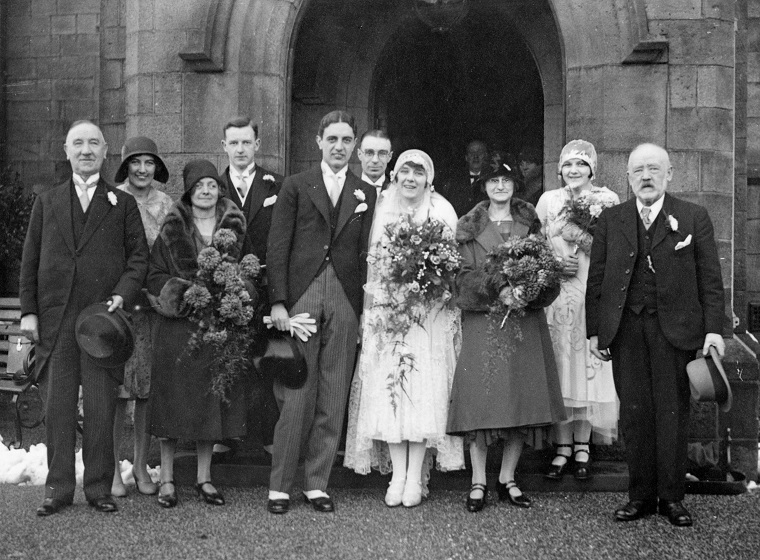 This photo was sent to us by Chris, whose parents – Harold and Cicely Newall (nee Hall) – can be seen in the centre, just after their wedding in 1929. Harold was a government scientist, and Cicely a school teacher. Chris describes them as ‘the most wonderful parents’. 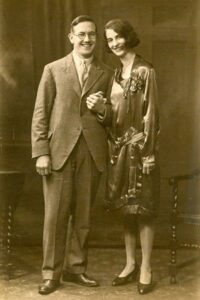 The newlyweds, 1929. Submitted by Sheridan Whitehead-Friedman.

This delightful photo, of a loving couple with infectious smiles, perfectly encapsulates how mesmerising photos can be to look at in isolation. The story that follows the wedding of Benjamin and Doris in 1929, carries an altogether different tone – no one could have known that war would again break out 10 years later, and the tragedy that would follow. Benjamin, a ‘decorative craftsman’ by trade, who earned a living painting works such as murals, fought in the Second World War. Sadly, he was none of many not to return; he contracted Polio while serving his country, and was the first soldier to die in an ‘iron lung’. Doris, who was living in South Africa after going with Benjamin for his work, was unable to return to the UK due to the war. As fate would have it, she met her future second husband there; they married in 1945. Doris never did return to the UK. 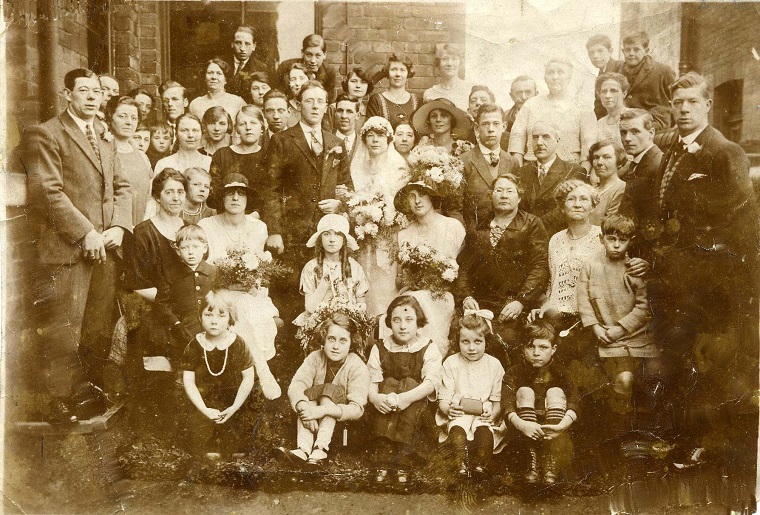 Albert and Mary (centre) with family and friends, 1925. Submitted by Hilary Jackson.

A staple of every marriage photo album – ‘everybody squeeze in!’ Hilary, whose parents have just tied the knot in this photo, sent in this brilliant wedding photo. Taken in 1925, it shows Albert Braithwaite and Mary Alice Irene Hickling, surrounded by their families and friends in the back yard of the bride’s parent’s house. Situated near Rotherham, South Yorkshire, a small farm and abattoir were behind the house, as the family were butchers. 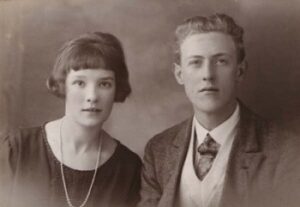 Ruby Hilda Abel married Sidney Locke Abel in June 1926 in Eastbourne, where this photo is likely to have been taken. As with many photos, a fascinating story lies behind this one, and everything is not quite as it seems: Matthew Abel, submitter and great-grandson, describes how Sidney had to lie about his age to disguise his status as a minor, revealing that the pair had eloped from their homes in South London to get married. Adding another complexity to the story, is the fact that Ruby was two months pregnant at the time with their first child.

The King siblings and friends 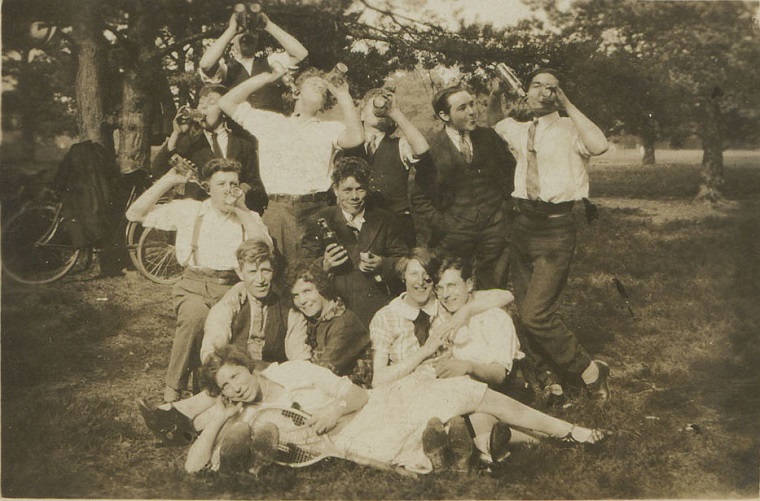 Submitted by Eileen, this photo provides a wonderful snapshot of a day spent with good friends. Most likely taken in Richmond Park, the photo shows the frolicsome nature of young people, the same nature that can be seen in friendship groups today. In the bottom left of the shot, Amy King can be seen sitting with her arm around Ernest ‘Cocker’ Knight; the two would be wed shortly after this photo was taken. 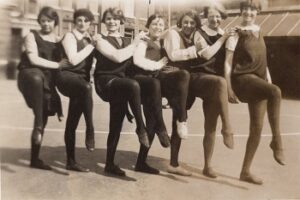 This tightly knit group is another great display of friendship. Jane Barker sent this photo in to us, whose mother Flora Sutton would have been 18/19 years old in this snap. The group appear to be netball teammates, posing for this photo on 30 April 1927; judging by the photo, they had a very strong team spirit! To Flora’s left is her best friend, Florrie. The two of them also played together at Chiswick Tennis Club where Flora met her future husband, Henry John Burden.

Is there a stronger bond than that shared by siblings? Here (left to right) Lewis William Riddle, Charles Alfred Riddle and Ernest Thomas Riddle pose together in the Kensington/Fulham area, around the middle of the decade, looking rather dapper, and rather synchronised, too. Perhaps rather fittingly, they all seem to be sporting rather boyish grins! Were they beaming with pride at their bicycles, or had something tickled them? Or had the novelty of photography amused them? Maybe someone had said cheese – we’ll probably never know; which is, arguably, all part of the fun when it comes to photography and leafing through old family photos. Keith, Charles’ son, tells us that Charles and Lewis’ families used to holiday together in the 1950s, travelling on American motorcycles. Charles, his wife, and Keith’s brother somehow managed to fit themselves, plus all the equipment required for two weeks in Devon, into a motorcycle and sidecar – quite a feat! 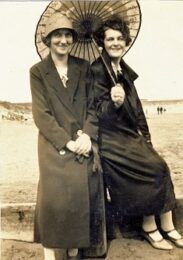 Mable and Doris in Bridlington, 1927. Submitted by Lisa Astle.

From brothers to sisters – Mable (left) and Doris (right) can be seen holidaying in the popular seaside town of Bridlington, East Riding of Yorkshire. They would often holiday there, a short trip away from their homes in Hull, which were just a few streets away from one another. This particular photo dates from 1927 and happens to have been taken by Harold Glover, the man who would marry Doris five years later; the couple were married for an astounding 63 years. Impressive figures seem to run in the family – Mable and Doris’ mother, Sarah, lived to 101! 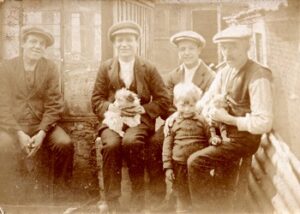 Sometimes, bonds are formed with animals to rival those of siblings or friends – and these two furry companions seem to be firm favourites! Submitted by Dawn, Ben’s daughter, this photo again comes with a startling backstory. It dates from around 1922, just before Ben left home to join the Army, after which he was posted to India in 1923. A year later, Sid & Harry sailed for Australia in September 1924, in search of new opportunities. Their father never saw Sid & Harry again; by a quirk of fate, Ben met Sid in Africa during the battle of El Alamein in 1942. As Dawn surmises, “joining the Army and emigrating to Australia were two ways of dealing with lack of work.” 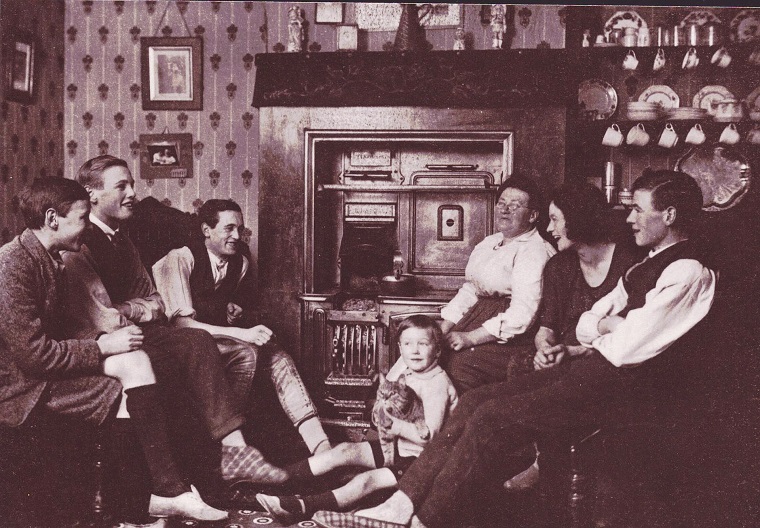 And last, but by no means least, a scene sure to warm the heart. Again the pet cat seems to be an adored member of the household, in this case the Lerwill family. Pictured here in 1923, the family had just moved into their new home in Billesley, Birmingham. Submitted by John Lerwill, his grandmother can be seen in the middle of the shot, his father on the far left.

Discover the full gallery of photos submitted by the public here: Your 20sPeople gallery